A Subversive Science for Today?

Britt Rusert’s Fugitive Science: Empiricism and Freedom in Early African American Culture brings to life the transatlantic world of scientific discourse in writing, performance, and art, all tied to the political project of abolition. Recounting a story from this “golden era of popular science,” Rusert highlights how “black art quite literally interrupt(ed) the dominant discourse of antebellum race science.” While George Combe presented a lecture arguing Black inferiority based on the pseudoscience of phrenology at the Philadelphia Museum, in 1838, the floor above hosted Black musician and composer Frank Johnson and his band. The stomping and cheering in the room above drowned out whole sections of Combe’s presentation; Combe complained he often had to pause in his remarks until the noise died down. This was, if not an alternative science, a showing of Black art, skill, and excellency interrupting the dominant narrative of Black inferiority that was the hallmark of racial science in this era.1 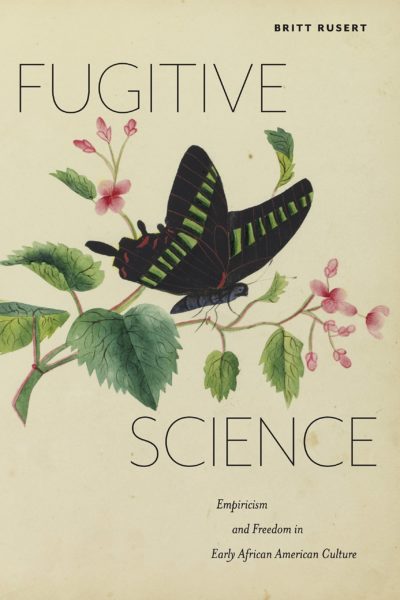 In the eighteenth and nineteenth centuries, race science became the driving logic to justify European colonization and imperialism, African slavery, and Native American genocide. Rusert shows how “racial science was actually composed of a wide variety of scientific fields, including comparative anatomy, craniology, phrenology, and ethnology, along with mesmerism, magnetism, and geology.” Science was used to solidify racial hierarchies as the state embarked on a new round of Indian wars, forcing displacement, enslavement, and dispossession in Jacksonian America. While science has never been a neutral force in society, and so often manifests in the service of colonial enterprises, Fugitive Science highlights the subversive uses of science. Rusert finds the response to racist science in art, friendship books, theater, and novels of the time. These sources open up an understanding of how science was made, debated, and conveyed, and how differing ideas were put forward into a contested world of science. Through visual and literary arts, African Americans found a way to challenge racist ideas and put forward their own scientific understanding.

Had Britt Rusert simply uncovered another stream of the Black freedom struggle—the history of Black refutation of race science—she would have written a noteworthy book. However, Fugitive Science does much more. Rusert shows Black people posing alternatives to race science, resisting its conclusions, and using creativity through popular mediums to convey a counter narrative.

One of the central ideas that Black scientists, authors, and artists sought to counter was that different races of humans have separate, unique, origins—a polygenic account of humanity. This theory was contravened with the monogenic account, now well established, that all humans come from common ancestors. Published in 1855, Josiah Nott and George Gliddon’s Types of Mankind popularized ideas of polygenesis and was one of the most influential racist tracts of the time. But Rusert finds the origins of dissent from racist science in the responses to the white supremacist science Thomas Jefferson penned seventy years earlier in his Notes on the State of Virginia. Those practicing what Rusert terms “fugitive science” reacted to these texts and challenged the notion of the polygenic origins of races and the practice of phrenology. The noninstitutional practice and dissemination of racist ideas created networks that were turned against the same ideas. Rusert goes so far as to claim that “the transatlantic networks mapped out by ethnologists in the defense of slavery became central to the articulation of an anti-racist science oriented toward transatlantic racial solidarity and the global abolition of slavery.” Showing how African Americans changed the scientific debate is the central point of her book.

Rusert sees Black abolitionist David Walker’s Appeal to the Coloured Citizens of the World as a direct reply to Jefferson and argues that it “serves as a reminder that early African American freedom struggles were waged on the terrain of black thought.” Rusert frames Walker’s Appeal as a call for “a full-scale critique of Jeffersonian science” that must, in Walker’s words, “emanate from the blacks.” Others attempted to convey a more practical knowledge of science. Martin Delany’s novel, Blake; or the Huts of America, brought science to the enslaved with maps of stars, constellations, and planets, teaching a lesson in how to use astronomy for navigation—crucial for the fleeing enslaved person.

It was not just writing that challenged racist science. Rusert demonstrates that the stage “doubled as a scientific laboratory,” producing new theories of race and bringing them to a mass audience. She brings alive the fugitive science in these popular lectures, minstrel shows, and natural history collections. The famed Henry Box Brown used popular science to link the struggle of African American enslaved people in the cotton fields to that of working class British subjects in cotton mills. While living in England, Box Brown regularly performed experiments using electricity as well as mesmerism for working class groups. Using mesmerism was subversive not simply because a Black man controlled a white audience member, but also because the performance showed a common cause of fighting dispossession that could be waged across racial lines. Rusert argues that Box Brown “provided a model of worker’s resistance that reconfigured the relationship between science and labor, suggesting that popular science might be used to imagine a form or resistance and emancipation that rejected labor altogether,” a truly radical notion.

Beyond contesting racist ideas and imagining new worlds, Rusert shows the work of African Americans leading the advance of science and medicine in this era. For instance, abolitionist and medical doctor James McCune Smith engaged Darwin’s ideas and in doing so, prefigured the work of modern genetics. McCune Smith argued that there is as much variability within the races as there is between the races. He writes, “so-called ‘races’ of mankind” are really only varieties of one species, the “human family.”’

Some of Rusert’s claims are admittedly speculative, and this might make for uncomfortable moments for some readers. She contends that since the archive for Black scientists and citizens is slim, speculation is necessary. Noting the alternative in a world with scant archives is silence and invisibility, she opts to claim what was likely or probable and leaves the reader to imagine other possibilities. The work of Sarah Mapps Douglass, a lecturer on anatomy and physiology, is a case in point. Having taught Rebecca Cole, the second Black woman in the US to hold a medical degree, we should expect the archival material for Mapps Douglass to be much greater than it is. Mapps Douglass created alternative teaching materials featuring African American subjects to compensate for the racist content or the total exclusion from textbooks at the time, which is still an infuriatingly common reality today.2 These archival absences call for the speculation, imagining, and raising questions found in Fugitive Science.

Rusert ends her history in the current moment, with a warning about the ancestry craze that is a full-blown industry today, that “tracks gene alleles across global populations and often unwittingly reproduces a hierarchy of racial difference…” Imagining a fugitive science in this biologizing of race is difficult, but might be found in a related concern. As the planet warms and climate chaos takes hold, we find ourselves in a not dissimilar place as the abolitionists in Rusert’s book. The double edge of holding up the institutional science that shows, among other concerns, that climate change is real can too often be used against local knowledge and alternative ways of seeing the world. Frontline communities, and Indigenous knowledge and ways of knowing, must be mobilized—as a fugitive science for today—to fight for a livable world under climate chaos. The abolitionist cause, which brought down an entire economic, social, and political way of life, should be an inspiration to the climate movement, which seeks to dislodge a comparatively powerful economic system: fossil capitalism. Rusert argues “fugitive science stands at the very intersection, at the cross-section of science and struggle.” Building a fugitive science for today is as great a challenge and as much of a necessity as it was during the time of Frank Johnson, Martin Delany, and Sarah Mapps Douglass.

Erik Wallenberg is a PhD candidate in the History Program at CUNY Graduate Center. His research is focused on the portrayal of environmental crises, politics, and science in activist theatre. He has taught classes in environmental history, global history, and environmental justice at Brooklyn College and the University of Vermont and is acquisitions editor at Science for the People. 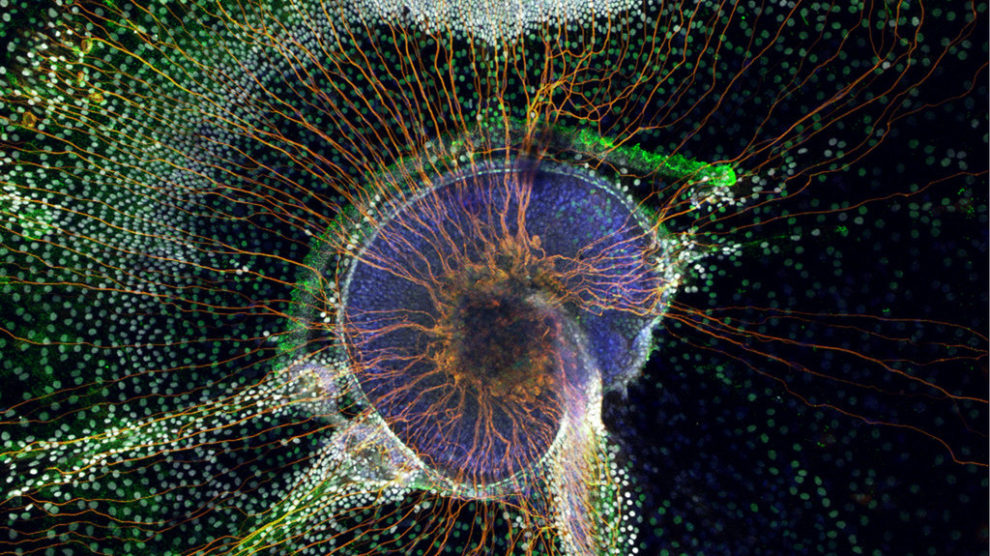 Reports from SftP chapters, the BIPOC Caucus, and the Translation Working Group, as well as information about SftP's fiscal sponsor. 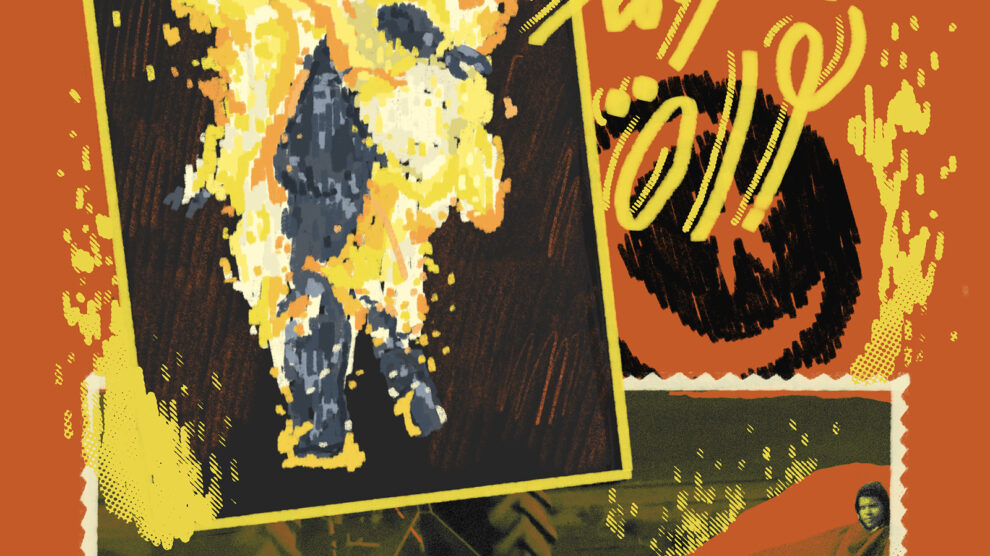 Hearing Loss in Gaza: Toward A Political Diagnosis
Science, Feminism, and Black Liberation: An Interview with Sam Anderson