Organize the Lab: Theory and Practice

More is Stronger: Only Radical Bottom-up Unionism can Change STEM

STEM departments remain some of the most abusive, inequitable, and inaccessible workplaces within academia. Rates of bullying are higher in STEM academia than other environments,1 and when complaints of abuse or harassment against underrepresented workers do occur, they are often mishandled or not taken seriously.2 For people who make it to the highest levels of the academic labor market, the prospects are no more promising. At the top fifty research universities, women hold only 31 percent of tenure-track STEM faculty positions, a figure that plummets to less than 2 percent for women of color.3 Those that do hold faculty positions are often burdened with time-consuming communal responsibilities and are more likely to leave academia than men.

At first glance, the growing trend of Diversity, Equity, and Inclusion (DEI) committees and mental health awareness within STEM academia might signal that appealing to administrative channels and formal procedures would genuinely improve working conditions. Such a view is illusory. These measures are generally public-facing, top-down performances of neoliberal idealism, from which we as workers scarcely benefit. When NYU’s Grossman School of Medicine was considering hiring disgraced biologist David Sabatini, who engaged in numerous cases of sexual misconduct, it was student-led organizing and walkouts that kept him from being hired. The institutional bodies that promote DEI committees and claim to advocate for the safety of student workers were the same ones that promoted his candidacy.4 Only radical bottom-up labor organizing has the tools and the power to effect material and cultural change within our fields. Our strike with the Student Workers of Columbia made this abundantly clear, and showed how STEM student workers can strengthen the broader academic labor movement.

Progress in universities always comes from those with virtually no individual power: student workers, especially those in underrepresented, marginalized groups who are most vulnerable to abuse. Student workers confront racial and gender inequalities, catalyze discussions in their academic communities, and apply for diversity grants (often as tokens on behalf of institutions). Meanwhile, their efforts often go unnoticed. If action is taken at an institutional level, it is usually only performative.5 Those with the most power to enact structural change in academia—tenured faculty and administrators—largely fail to heed the call to action.6 Instead, they are more incentivized to prove their allegiance to scholarly leaders in their fields and the institutions that employ them, and buy into a belief in bureaucratic procedure and the “liberal utopia” of academia that erases the legitimate concerns of students and workers. There are numerous instances of a faculty member’s abusive behavior being an open secret among the field and university, with performative action taken only after the most harmed spoke out, such as astronomer Geoff Marcy at UC Berkeley, historian William Harris and psychiatrist Jeffrey Lieberman at Columbia.7 Even still, the action almost always only treats the symptom rather than the cause: firing the abusive professor but failing to engage with the academic structure that allows abuse to thrive.

In contrast to procedural advocacy through the top-down channels established by the university, labor organizing works to deliver real change. To this end, our strike had four main demands: neutral arbitration for cases of discrimination and harassment, full recognition of our bargaining unit, interdepartmental pay parity and a raise to approach a living wage, and improved health benefits. However, the barriers to achieving these goals would prove to be significant. We struck against one of the strongest institutions in the world, and one of the fiercest at union-busting: a university that fought our demands for nearly a decade and spent upwards of $1,500 an hour for the huge anti-labor law firm Proskauer and Rose.8 Throughout the bargaining process, both Columbia’s team and our ostensibly-neutral mediator constantly told us our demands were extravagant and that we had to lower our expectations. Despite their condescension, and as a direct result of our strike and organizing, we won all of our demands. No top-down measures have achieved close to those won through our collective action.

As has been demonstrated countless times, universities have little incentive to pursue  institutional initiatives. They view students and employees as resources to exploit when useful and as problems to ignore when they demand real change. Institutional initiatives can only reform the operation of academic power structures, whereas labor organizing can directly challenge them.

Similarly-placed unions at comparable institutions lacked the numbers and the power that comes with democratic unionism. For example, we were disheartened when, early in our strike, the Harvard Graduate Students Union (HGSU) dropped their demand for full neutral third-party arbitration in cases of harassment or discrimination rather than striking to achieve a better contract.9 HGSU’s capitulation on neutral arbitration, a crucial demand at our own bargaining table, was perhaps inevitable for a union without member-driven strike power. In contrast, our success was fueled by an active union membership; we were able to force Columbia to concede through a massive strike lasting close to ten weeks. Our union was willing to remain on strike because the start date, bargaining demands, and duration of the strike were all democratically chosen by the rank-and-file union members. In short, the union truly represented us. For better or for worse, the struggle of workers at one academic institution affects the working conditions of those elsewhere. In the future, the strong contract we achieved will bolster student worker organizers all across academia, as it sets a standard for what can be won from powerful academic institutions at the bargaining table.

For a student worker strike, the most obvious form of withheld labor comes from teaching assistants and instructors. However, in STEM, many student workers only perform research work, which is fundamentally entangled with their personal academic progress, and thus not considered “strikeable” labor. Finding alternative avenues for STEM student workers to further the strike was crucial for our strike’s success. STEM workers were key members in efforts to disrupt university operations. STEM student workers canceled department seminars and colloquia, and urged visiting speakers to cancel or postpone in solidarity, with substantial success. STEM workers also set up picket lines in front of delivery bays, asking unionized drivers not to cross, and effectively stopping deliveries ranging from lab equipment and office supplies to compressed gas and dry ice. These delivery stoppages relied on individual solidarity between delivery drivers and student workers, as well as large-scale coordination with locals in the New York City area. Delivery stoppages forced STEM departments to finally engage with our struggle; when research labs faced delays in receiving supplies, professors and department leadership could no longer pretend, as they had done in the past, that the strike was an issue concerning only those involved in teaching.

Striking STEM workers also appealed to faculty members in their departments—who might otherwise have remained apolitical in the mode typical of scientists—to attend informational town halls about the demands of the union and the state of negotiations. Workers met privately with the professors leading their research groups to educate them. Through these discussions, we learned that many of the Principal Investigators were uninformed, or only following the biased perspective advertised by the administration, of whom they were often suspicious as well. These personal interventions were a vital step in counteracting the false narratives dispersed, on a nearly daily basis, to faculty by university administrators in an effort to paint our demands as frivolous and unnecessary. As a result of these informal sessions and conversations, many STEM faculty members began to recognize the importance of protections against the harassment and discrimination that is rampant in research workplaces. Finally, STEM student workers participated in our large and visible picket lines. The sheer number of striking workers added immensely to the power of the strike and created opportunities for publicity and media coverage; harnessing the power and size of the STEM worker population was a vital part of this. As we have grown in numbers and consciousness, we’ve learned how to mobilize research-heavy STEM departments. More time and experience can only amplify our collective power.

Unlike the performative and incremental action taken at the institutional level, unions can  shift the balance of power. To reshape STEM academia, our union must not focus solely on economic conditions but must also engage with the broader political and structural realities of STEM labor. We need to consider the socioeconomic impact of our research and the exploitative relationships in our labs and departments. What motivates our research? Which institutions (military, governmental, or private) fund our research, and why?10 Finally, who stands to gain from the work we do, and how?11 We dream of labs and research groups where student workers are informed and empowered to engage in meaningful research that contributes to global justice.

As it stands, we are often required to work within the confines of our ever-expanding universities that operate as businesses as they vie for bigger endowments, more land, and greater social and political capital.12 Take, for example, Columbia’s newest Manhattanville Campus—a STEM-branded project, housing the Jerome L. Greene Science Center and initially touted as a public good necessary for the advancement of Alzheimer’s research.13 The new campus is built on the remains of city blocks purchased and bulldozed by Columbia, who is fueling the “science-washed” gentrification of West Harlem.14

We have the world to win by organizing. Our strike resulted in massive achievements at the bargaining table, but entrenched issues must be addressed with further organizing within departments, increased involvement of faculty across the university, and engagement with broader movements for social justice. We haven’t yet addressed department hierarchies, the deepening casualization and adjunctification crises, the funding disparity between sciences and humanities, or the deeply unethical system by which grants are funded.15 We must continue to challenge institutions that amass extreme wealth as they squeeze every penny out of public grants and displace communities through gentrification and feudalistic land hoarding. We have shown that labor organizing works; where can we go from here?

Science Work and Service Work: Exclusion and Exploitation at the University of Iowa

In recent years, a revived militant left-wing movement has emerged among adjunct and graduate labor within higher education, organizing around low pay, precarious working conditions, and a deskilling of the profession amidst a decline in... 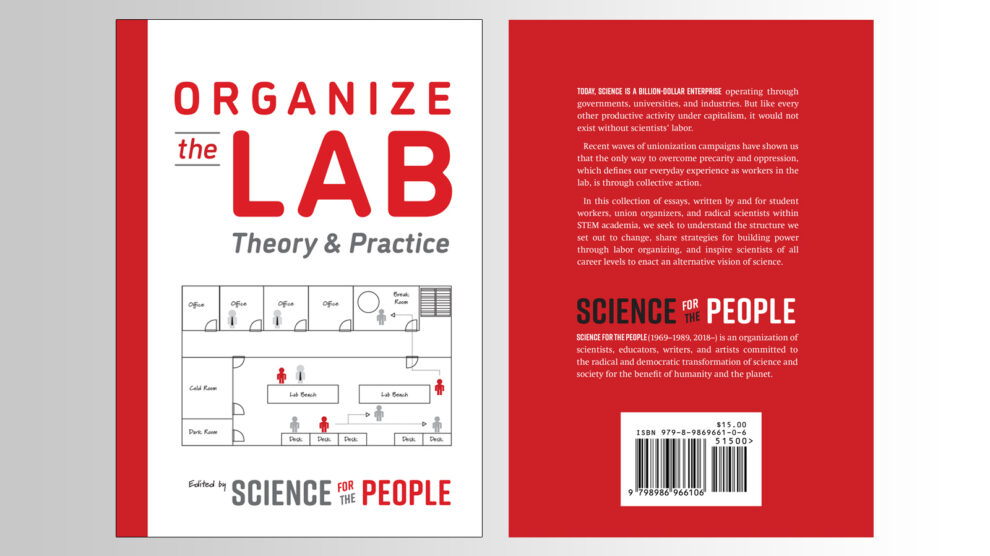 I’m a STEM worker: a graduate student, trainee, fellow, investigator—whatever the job title may be. As someone who works in a lab, I am expected to work through the weekend and past my contracted hours in the week. I like the idea of...

Out from Under the Umbrella

As thousands of academic workers in the United States strive to unionize across different university campuses, many organizing campaigns struggle to engage a key demographic: PhD students in STEM departments. Reasons for hesitation among...

Science academia is under tremendous pressure to change. In the past few years, marginalized groups have called for the opening up of academic institutions, especially to make STEM more accessible to a broader palette of students...