“Once upon a time a valiant fellow had the idea that men were drowned in water only because they were possessed with the idea of gravity.” 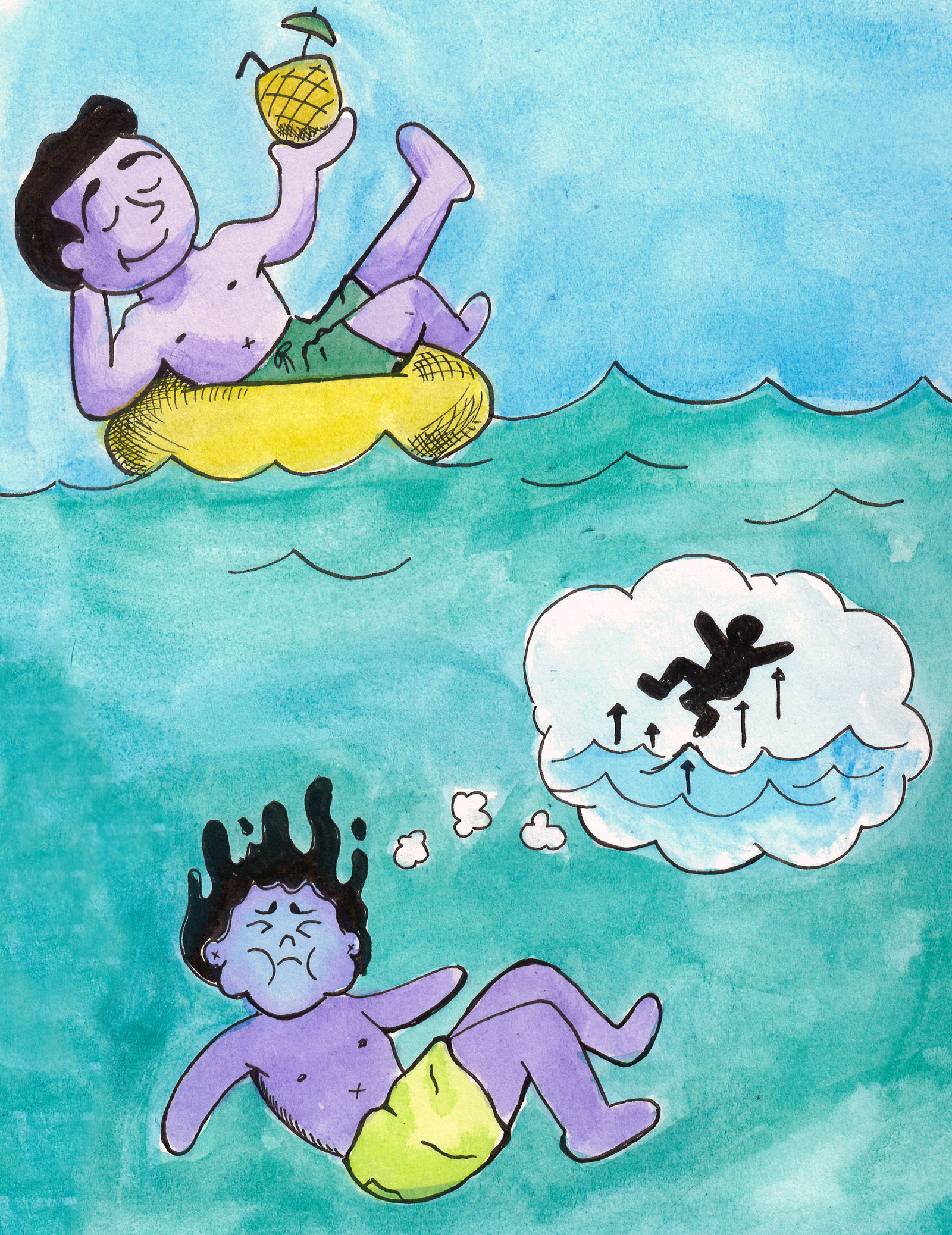 Marx and Engels wrote The German Ideology (1845) during a time of rapid social transformation throughout Europe and parts of the world that Europeans colonized, as capitalism revolutionized the way people lived their lives.1 The feudal kings’ grasp on power had been chipped away by a new class of wealthy industrialists. Together with rapid technological change, these economic and political transformations made the old world anew. 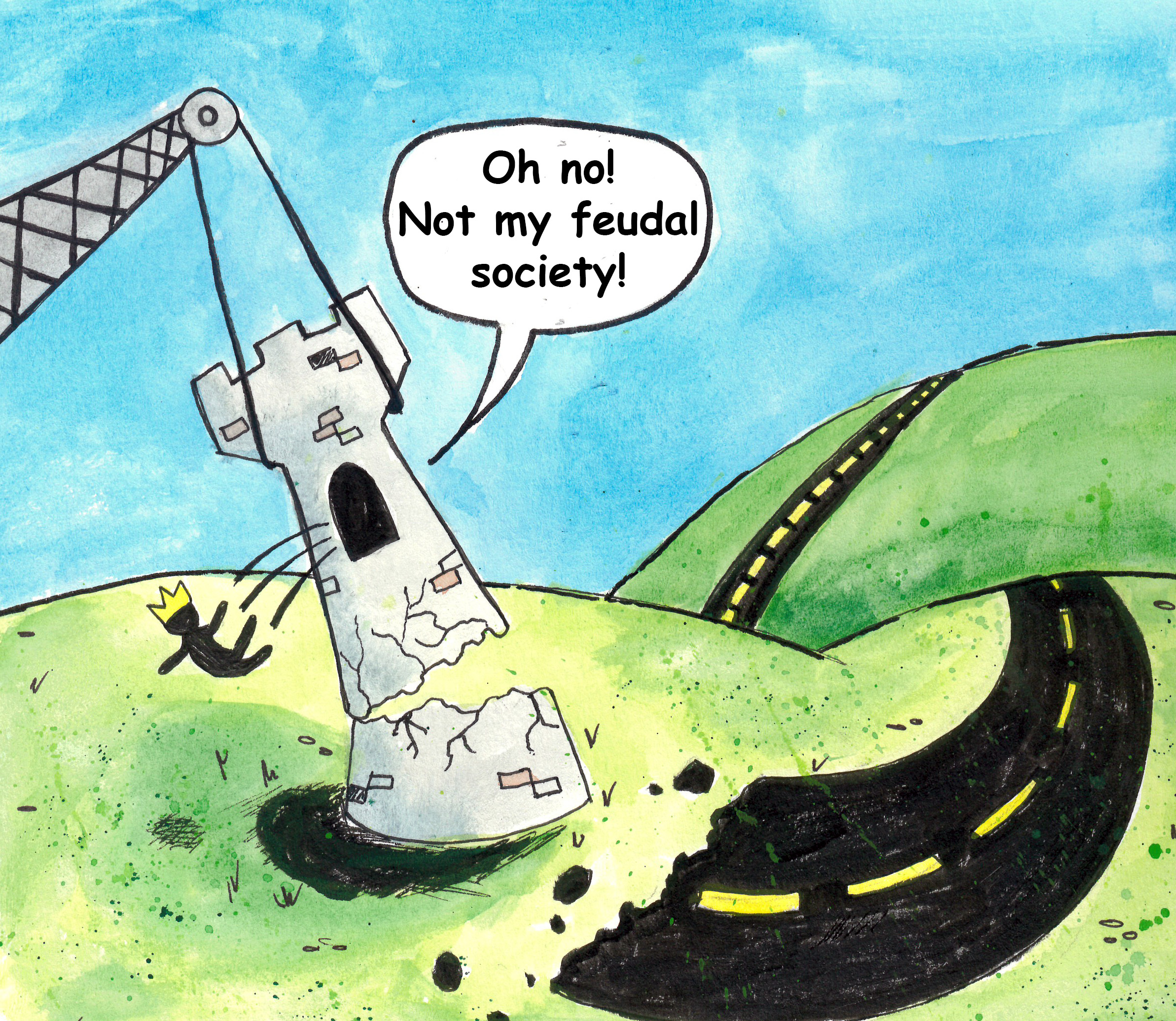 As philosophers ruminated over these unprecedented historical changes, they came up with many explanations. English political economists theorized the mechanisms of the market; French radicals carried on the Revolution with treatises on morality and justice; the Germans, however, lacked philosophical weight. Hegel and his disciples were stuck “in the realm of pure thoughts,” divorced from the material reality of a nascent capitalist society.2 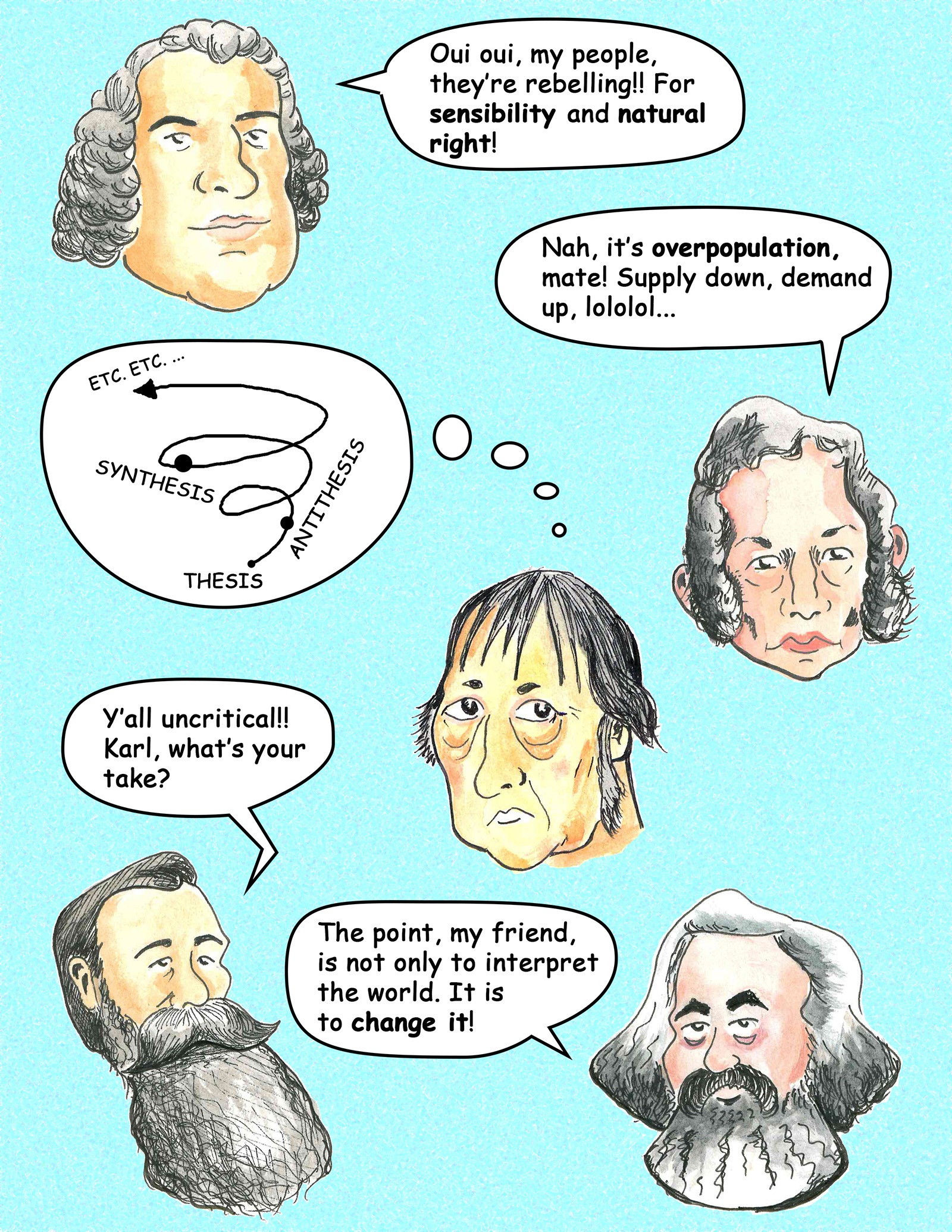 To address the dire state of German ideology, Marx and Engels focused on the interplay of ideas and the objects and experiences in one’s environment, as they interpreted the ways that real life (material conditions) and consciousness (mental conceptions) contradicted, reinforced, and shaped each other.

In introducing a dialectical materialist view of the year 1845, they also established a theory of human history.3

In the beginning, there is a human. To survive, this human must eat, drink, and have shelter; the way they go about ensuring subsistence (i.e., producing the means of living) regulates their actions. And the acts themselves reinforce how they think and who they are.4 But humans do not live like the fictional Robinson Crusoe: not only do they reproduce (which already premises living in a community), they also cooperate to ensure mutual subsistence. In production, which shapes humans as social beings, the relation to other humans is as important as the relation to nature. In other words, it is in our nature to cooperate.

In foraging societies, humans cooperated to hunt, gather, and raise children communally. This is often idealized by utopian socialists as a romanticized notion of a communistic society. However, individuals within these societies were not inherently more “cooperative”; it was simply the nature of the productive forces (e.g., hunting, gathering, and social reproduction) that required humans to have a closer social bond. Put simply, individuals cannot hunt on their own and subsist, when a mishap in hunting could mean starvation; nor can they produce enough alone to raise a family—and so, they must rely on others. 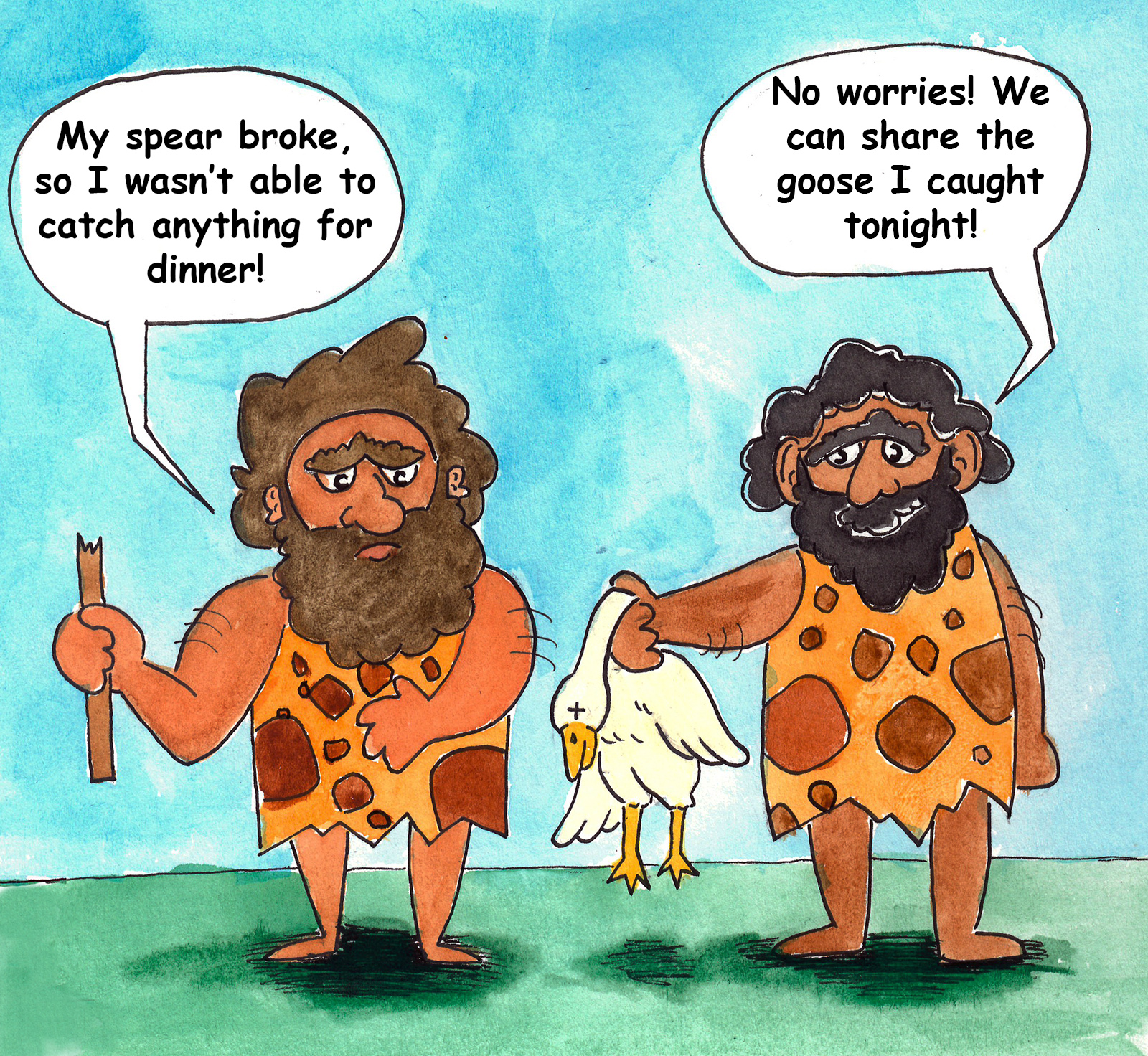 But the productive forces are always adapting to changing climates, natural resources, and evolving human ingenuity. For example, our mental conceptions can improve the means of production: a bigger bow (means of labor) increases the yield of hunting (subject of labor). With more surplus during production, social relations change and cooperation also transforms.

Increased surplus and population in tribal societies also resulted in a different division of labor that allowed some people to serve specialized functions in society. Who but the chieftain could manage the surplus and assign labor-power to coordinate a more sophisticated social organization? Don’t we need warriors to protect us in case other tribes try to steal our surplus? What place do I hold in the tribe, if not assigned by religious authorities? Classes of people with different relationships to production began to solidify. The chiefs do not hunt, but they take the surplus I and others produce. Social class conditions one’s life, and therefore, one’s thoughts.5 Hierarchy arises not from abstract ideas about “power,” but out of the practicality of particular social arrangements; so do ideological justifications of rule.

Agriculture gradually replaced hunting and gathering as the primary mode of production, drastically changing both natural and social relations. As social wealth became inseparable from land use, there arose the material need to form centralized governing bodies to administer ever larger territories. Oftentimes this resulted in warfare when different tribes or nations contested the same land; other times it spurred technological advancements, like the aqueduct that transformed barren fields into fertile soils.

In agricultural societies, cooperation occurred at the level of small communities tied to the land. First, as in Roman times, it was the enslaved class who planted crops to produce surplus for the patricians and the plebeians. However, cooperation was discouraged due to the fear of slave rebellions (e.g. one led by Spartacus). In the same vein, the extremely compulsory nature of slave labor disincentivized improvements in the means of production: what do the slaves have to gain by making a better tool, if nothing they work for can be theirs? The lack of both cooperation and ingenuity in Rome resulted in insufficient productive forces; its fall corresponded to the rise of a new, feudal relation of production. The surplus-producing class was now the serfs, who could cooperate to a greater degree as they saw themselves scions of the land, paying levies to lords and kings. 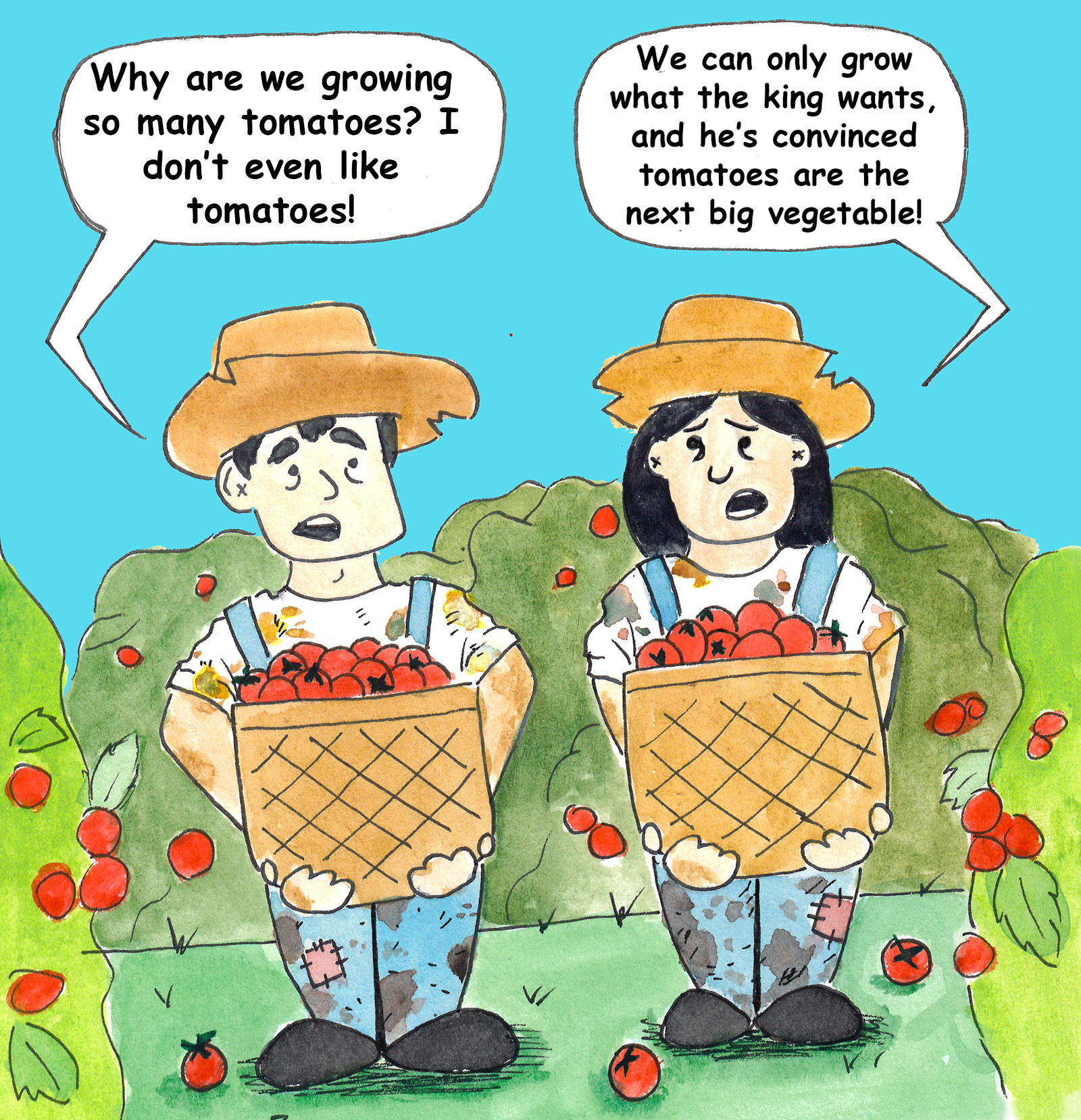 Because of their different material conditions, societies in other parts of the world developed along different trajectories from European feudalism. For example, irrigation played an important role in shaping social organization in parts of ancient Mesoamerica, where a common struggle for water in a dry climate may have given rise to collective water management, and thus democratic forms of production and distribution.6 Yet, irrigation may have had an opposite effect in ancient China; frequent flooding of large plains required a strong centralized authority with technology and resources to control the river as well as the population.7 With such a diversity of materials, history is full of alternative potentialities.

Much surplus produced by feudal serfs was consumed by religious institutions in Europe. Churches were birthplaces of art, architecture, and literature; clergymen were of high social status. Religion played a big role in medieval lives not because medieval humans were more superstitious, but rather because religious institutions were a necessity for and consequence of the formation of ideology. Christianity was the glue that held the European social order together. It sanctified the land, stipulated how humans should behave among one another through moral codes, and enshrined existing social hierarchy as divine providence. Ideology is in turn reflected in the materials: if you can’t hear the church bell, you’ve ventured too far into a strange land.8

What is the ideological adhesive in today’s capitalist societies? Christianity is replaced and transformed by concepts of individuality, liberty, rights, and property—the pillars of the capitalist ideology: liberalism. Can individuality be in the minds of humans in a hunting-gathering society, when collective pursuit of subsistence eclipses other life-processes? Could liberty thrive in feudal times, when a small plot of land was the basis of peasants’ relationships to nature and to one another?

Under capitalism, how do we relate to nature and to one another? As individuals, we are now free to sell our labor-power for money, and it is within our rights to obtain, with money, everything we need to survive. It appears as if we no longer need tribes, nor communities, nor perhaps even families. Is this the “end of history” of cooperation?

We are mystified by liberal ideology to see the self, the individual, as the quintessential element. And yet, the market sees individuals as abstracted and homogenized blocks of value. This is a contradiction. The value of an individual laborer can be determined only by the social average via the market; profitability and productivity are substantiated only through competition; individual skills or talents do not matter if there is no aggregate demand.9 And why is it that we are always being measured and quantified through standardized testing, productivity metrics, marketing surveys, and other means? Individuality is an ideological necessity, and a fetish, yet when were individual humans ever treated as such under capitalism?10

In fact, we the workers are cooperating as the surplus-producing class. Contrary to the serf’s tangible relations to the land and to other serfs, our relations to the means of production, and to other people, are abstracted by commodities (including our own labor). For example, the laptop I’m using to type this essay was made not by a handful of people in my community whom I could name, but through a supply chain that transferred surplus value from millions of laborers. But my relationship with the bakers down the street is exactly the same as my relationship with the millions of lithium miners, chip makers, and parts assemblers from Bangladesh, Indonesia, and California: I consume what other humans produce. Under capitalism, members of the global proletariat cooperate to produce surplus. It does not appear so, but we rely on ever more people in an ever larger “community” for our subsistence. 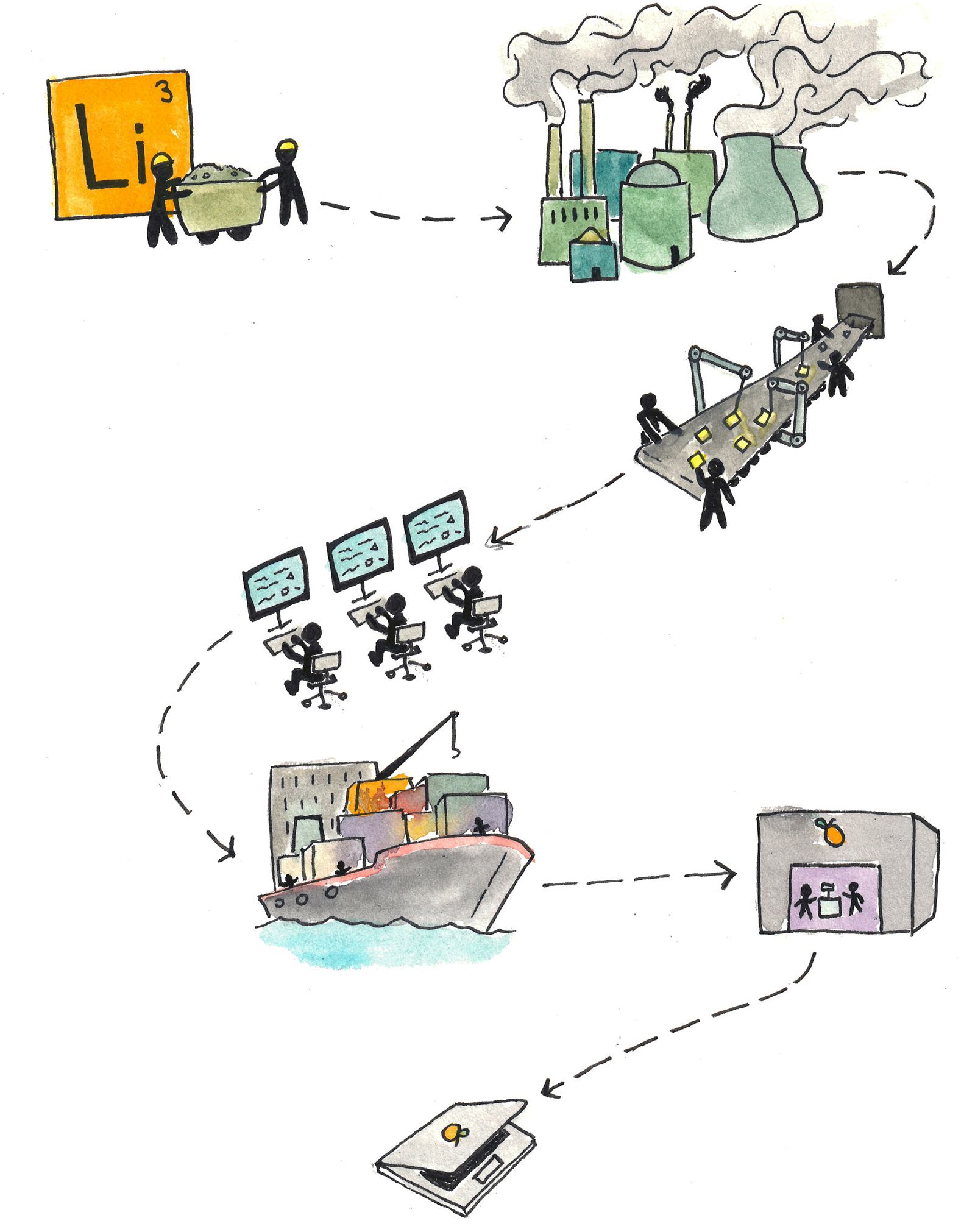 And where does the surplus produced by the majority of humanity go?

Through exploitation, capitalism has bestowed on a small ruling elite the stewardship of an entire global community. Faced with such irrationality, a historical materialist would neither retreat to insularity nor appeal to pre-defined concepts of ethics or justice within the constraints of liberalism. Don’t be that valiant fellow who thinks of cooperation as merely a good idea. Remember: the ruling class also cooperates! In order to create a genuinely democratic social system of wealth production and distribution, we must first understand the historical processes of the problem at hand—which, if viewed through a historical materialist lens, we see that the solution already exists.

Want to see more graphical features? Support our artists by subscribing or purchasing this issue! 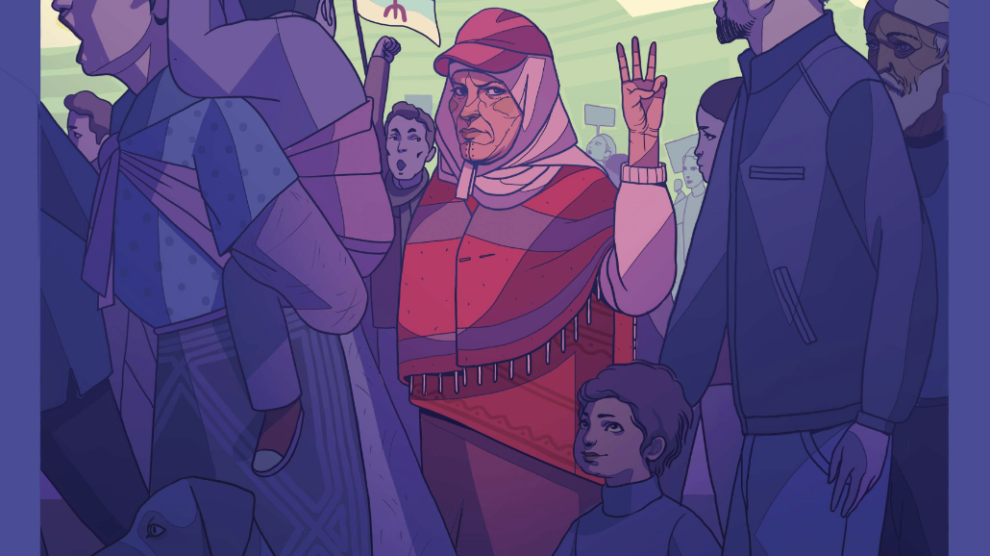 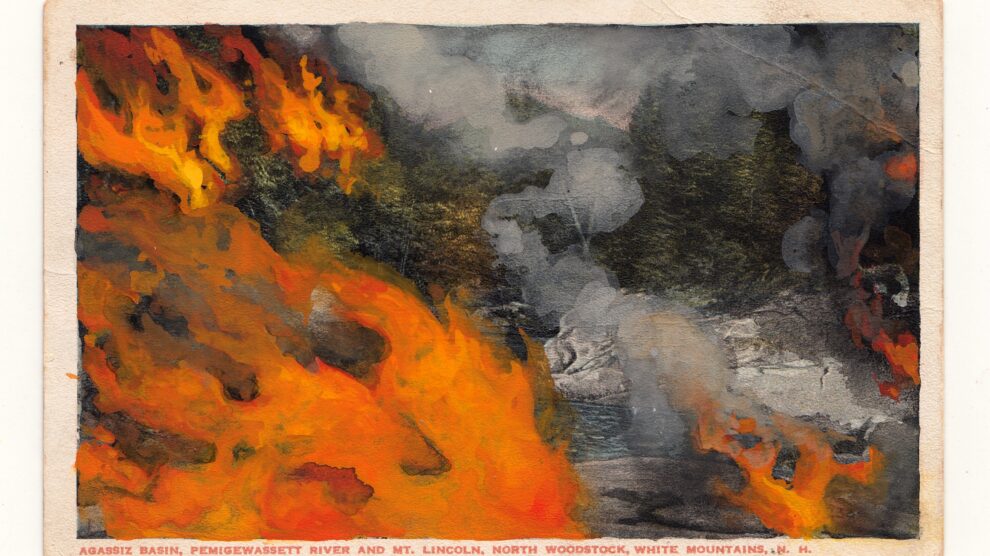 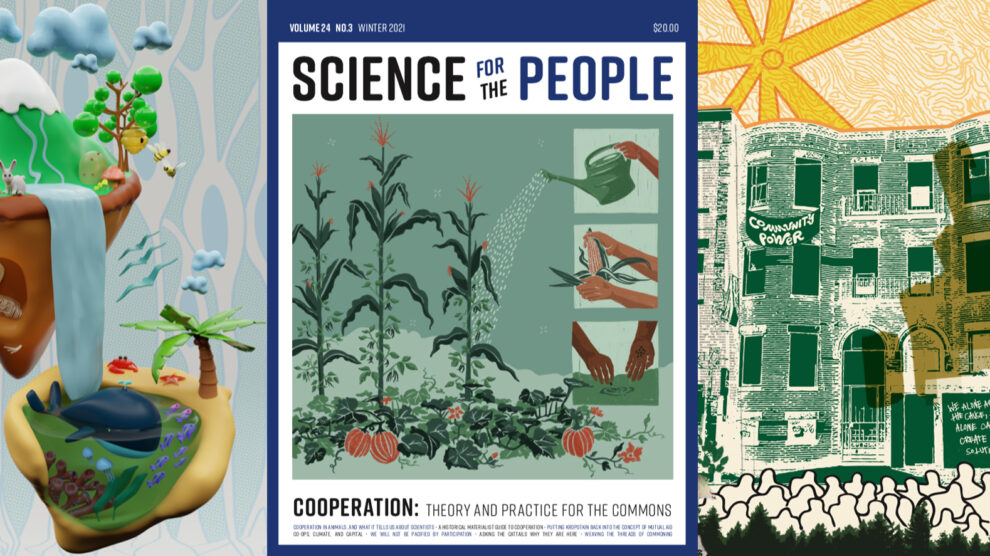 On the Cover of Cooperation

A look at the original art by Dio Cramer and Seena Mavaddat in the magazine's Winter 2021 issue.